The year is 1911 when twenty-year-old heiress Peggy Batternberg is invited to spend the summer in America’s Playground.

But the invitation to Coney Island is unwelcome. Despite hailing from one of America’s richest families, Peggy would much rather spend the summer at the Moonrise Bookstore where she works voluntarily, than keeping up appearances with Brooklyn socialites and her snobbish, controlling family.

But soon it transpires that the hedonism of Coney Island affords Peggy more of the freedom she has been longing for. For one, she finds herself in love with a troubled pier-side artist of humble means, whom the Batternberg patriarchs would surely disapprove of.

Disapprove they may, but hidden behind their pomposity lurks a web of deceit, betrayal and deadly secrets. And as bodies begin to mount up amidst the sweltering clamour of Coney Island, it seems the powerful Batternbergs can get away with anything…even murder.s

It is up to Peggy to overcome the oppression of her family and clear the name of her vulnerable lover, before she or her beloved sister become the next victims of Dreamland.

Extravagant, intoxicating and thumping with suspense, bestselling Nancy Bilyeau’s magnificent Dreamland is a story of corruption, class and dangerous obsession. "Dreamland" is Nancy Bilyeau's fifth novel of historical suspense. She is the author of the best-selling historical thriller “The Blue” and the Tudor mystery series “The Crown,” “The Chalice,” and “The Tapestry,” on sale in nine countries.

Nancy is a magazine editor who has lived in the United States and Canada. She studied History and English Literature at the University of Michigan. After moving to New York City, she worked on the staffs of “InStyle,” “Good Housekeeping,” and “Rolling Stone.” She is currently the deputy editor of the Center on Media, Crime and Justice at the Research Foundation of CUNY and a regular contributing writer to “Town & Country" and "Mystery Scene Magazine."

Nancy’s mind is always in past centuries but she currently lives with her husband and two children in Forest Hills in the borough of Queens. "Dreamland" is her first novel set in her adopted hometown of New York City.


Monday, August 19
A Bookish Affair
Gwendalyn's Books
What Is That Book About

Tuesday, August 20
Clarissa Reads it All
Just One More Chapter
Books In Their Natural Habitat

Saturday, August 24
Broken Teepee
Passages to the Past
Locks, Hooks and Books 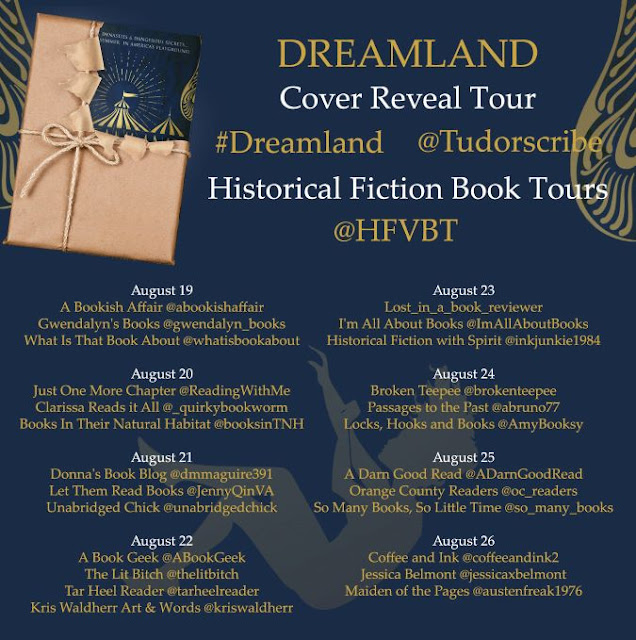