"Lord John and the Brotherhood of the Blade" by Diana Gabaldon 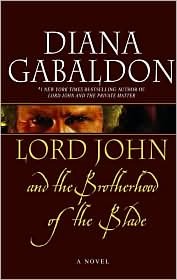 From Goodreads:  Diana Gabaldon takes readers back to eighteenth-century Britain as Lord John Grey pursues a deadly family secret as well as a clandestine love affair, set against the background of the Seven Years War.
Seventeen years earlier, Grey’s father, the Duke of Pardloe, shot himself, days before he was to be accused of being a Jacobite traitor. By raising a regiment to fight at Culloden, Grey’s elder brother has succeeded in redeeming the family name, aided by Grey, now a major in that regiment. But now, on the eve of the regiment’s move to Germany, comes a mysterious threat that throws the matter of the Duke’s death into stark new question, and brings the Grey brothers into fresh conflict with the past and each other.
From barracks and parade grounds to the battlefields of Prussia and the stony fells of the Lake District, Lord John’s struggle to find the truth leads him through danger and passion, ever deeper, toward the answer to the question at the centre of his soul–what is it that is most important to a man? Love, loyalty, family name? Self-respect, or honesty? Surviving both the battle of Krefeld and a searing personal betrayal, he returns to the Lake District to find the man who may hold the key to his quest: a Jacobite prisoner named Jamie Fraser. Here, Grey finds his truth and faces a final choice: between honour and life itself.

My Thoughts:  I am a huge Outlander fan and I think that is why I decided to read the Lord John books.  The eighth Outlander book won't be out until next year at the earliest so I need something to help me get my Jamie Fraser fix.  Lord John and the Brotherhood of the Blade is an okay book; it gives you more background about Lord John and his childhood and family which is nice to know.  It's not an overly exciting story and I think I really would have hated it if I wasn't an Outlander fan.  It's one saving grace is that Jamie Fraser makes an appearance.  There are other characters that I would much rather read about from Gabaldon's books but I don't hate Lord John.  It just seems like he is kind of whiny and spoiled and it gets kind of old.  I actually enjoyed the female characters in this book (his cousin, mother and sister-in-law) much more than I liked him and would enjoy reading more about them in future Lord John books. 3 stars.