New Release! "Garden of Her Heart" by Shanna Hatfield

Picture a beautiful summer day when the sky is clear, the temperature is warm, but not uncomfortably so, and the humidity is low.

On one of those ideal summer days, Captain Cavedweller (my husband) and I climbed a hilly path to visit the Japanese Garden in Portland, Oregon. We heard it was “nice” and “pretty,” but we had no idea what to expect.

After we topped the hill and paid our admission at the little gate booth, we walked inside the garden, spellbound by the beauty around us. For a few minutes, we didn’t move, absorbed in the wonder of being transported to a completely different world in a matter of a few steps. The garden — oh, such a lovely garden. I highly recommend visiting it if you are ever in the area. There are ponds with bright orange fish, walking paths, raked sand, and a waterfall. In truth, in my mind’s eye, it is Miko’s secret garden, only bigger.

It was while we wandered along the moss-covered stones and stepped across the wooden bridges that the idea for this story began to percolate. What if there was a girl who lived in a secret garden? Why would she be there? What scenario would drive her into hiding in a Japanese garden up on a hilltop that no one knew was there?

As Captain Cavedweller and I ambled among weeping cherry trees and vibrant flowering bushes, I blurted out my thoughts. Then somehow, in a wonderful blending of ideas, we both arrived at the conclusion of World War II. A Japanese girl would have every reason to hide, had she the opportunity to do so, in 1942 when the government ordered all Japanese along the West Coast “military areas” to report to Assembly Centers.

And so the story was born. 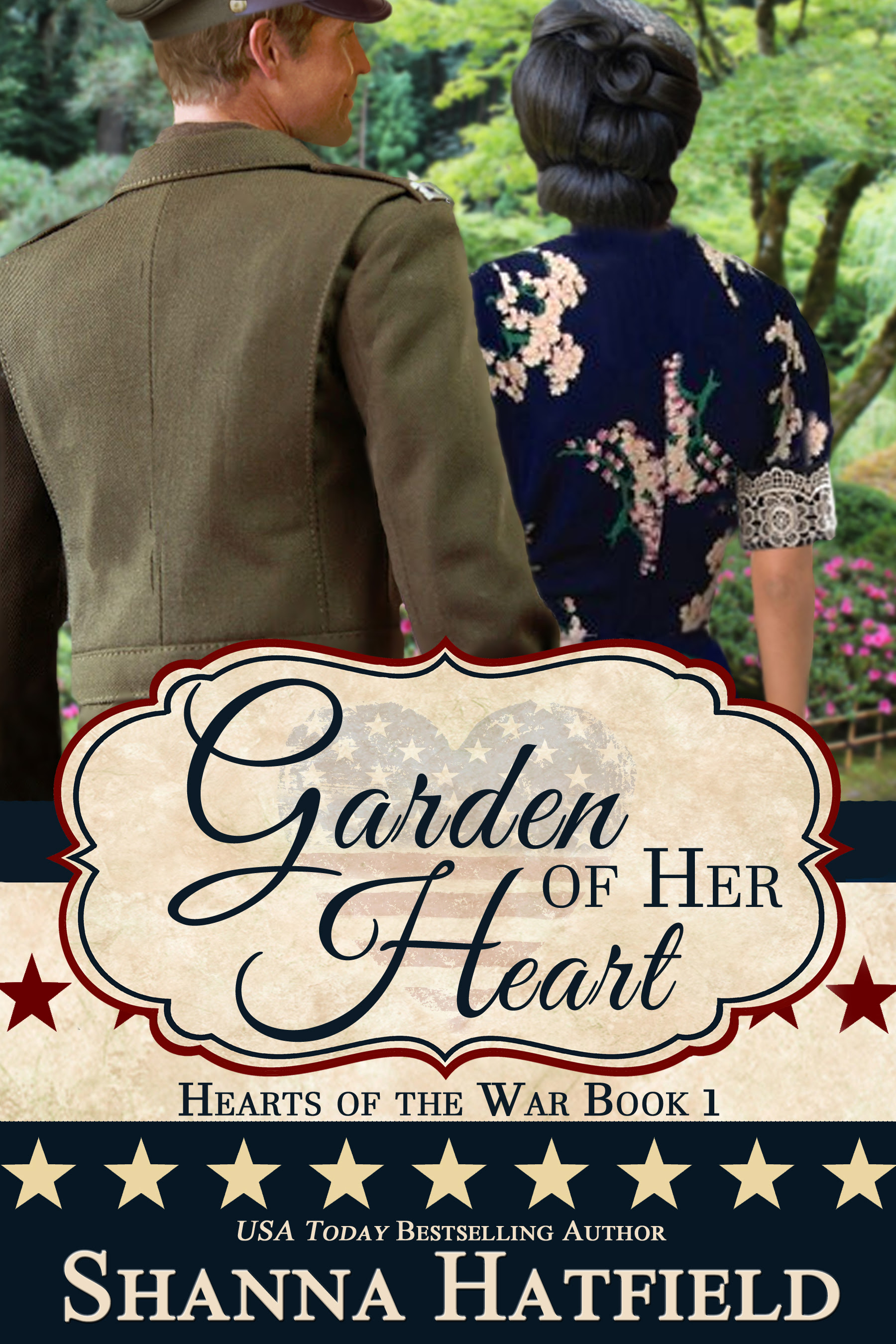 amid the constraints of war?

The moment the Japanese bombed Pearl Harbor, life shifted for Miko Nishimura. Desperate to reach the Portland Assembly Center for Japanese-Americans, she’s kicked off the bus miles from town. Every tick of the clock pushes her closer to becoming a fugitive in the land of her birth. Exhausted, she stumbles to her grandparents’ abandoned farm only to find a dying soldier sprawled across the step. Unable to leave him, she forsakes all else to keep him alive.
After crashing his plane in the Battle of the Atlantic, the doctors condemn Captain Rock Laroux to die. Determined to meet his maker beneath a blue sky at his family home, he sneaks out of the hospital. Weary and half out of his mind, he makes it as far as a produce stand he remembers from his youth. Rather than surrender to death, Rock fights a battle of the heart as he falls in love with the beautiful Japanese woman who saves his life.
A poignant, sweet romance, Garden of Her Heart proves love can bloom in unlikely places even under the most challenging circumstances.

Don't miss out on this beautiful happy ever after. Get your copy today!

Excerpt:
“Please, Miko? Would you at least consider marrying me?”
She shook her head and tried to pull away from him, but he drew her closer, wrapping his arms around her and holding her. His breath tantalized her ear as he bent his head near hers. “Please?”
“I can’t, Rock. I don’t want to be the cause of you missing out on the love of a lifetime.” She turned her head to the side and pressed it against his neck. Unintentionally, she heightened the yearning that already pulsed between them. Forcibly, he relaxed his hold on her.
“Miko,” he whispered. “Look at me, sweetheart.”
Unhurried, she tipped her head back, drawn into the bright warmth of his eyes.
“Miko, if I didn’t want to marry you, I wouldn’t offer. I rather like the idea of spending my future with you. We have more going for us than many couples who wed. There is no doubt in my mind at all about your ability to be a good wife. Me, on the other hand…” His cocky grin brought an amused light to her eyes. “It might be challenging to be married to someone like me.”
A smile curved her mouth upward and Rock tamped down the desire to kiss her again, even with the pastor watching their every move.

USA Today Bestselling Author Shanna Hatfield writes character-driven romances with relatable heroes and heroines. Her historical westerns have been described as “reminiscent of the era captured by Bonanza and The Virginian” while her contemporary works have been called “laugh-out-loud funny, and a little heart-pumping sexy without being explicit in any way.”
Convinced everyone deserves a happy ending, this hopeless romantic is out to make it happen, one story at a time. When she isn’t writing or indulging in chocolate (dark and decadent, please), Shanna hangs out with her husband, lovingly known as Captain Cavedweller.
Find Shanna’s books at:
Amazon | Amazon UK | Barnes & Noble | Smashwords | Apple | Audible
Shanna loves to hear from readers. Follow her online at:
ShannaHatfield | Facebook | Newsletter | Pinterest | Goodreads | You Tube | Twitter