Review: "The King's Daughter" by Sandra Worth 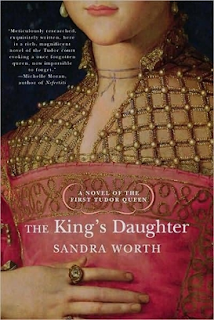 From Goodreads:  Seventeen-year-old Elizabeth of York trusts that her beloved father's dying wish has left England in the hands of a just and deserving ruler. But upon the rise of Richard of Gloucester, Elizabeth's family experiences one devastation after another: her late father is exposed as a bigamist, she and her siblings are branded bastards, and her brothers are taken into the new king's custody, then reportedly killed.

But one fateful night leads Elizabeth to question her prejudices. Through the eyes of Richard's ailing queen she sees a man worthy of respect and undying adoration. His dedication to his people inspires a forbidden love and ultimately gives her the courage to accept her destiny, marry Henry Tudor, and become Queen. While her soul may secretly belong to another, her heart belongs to England.

My Thoughts:  I like that The King's Daughter is a Tudor era novel without having the usual played out story and characters.  This book focuses on Elizabeth of York who married the first Tudor king, Henry VII.  It follows her life as child all the way through to her death.  We get to see her life while her father was king, while Richard III was king and while she was queen and married to Henry VII.  Sandra Worth made Elizabeth into an incredibly strong, loving character who gave up all personal happiness in the hopes that she could bring peace to England.  Elizabeth's character is extremely admirable and I was very sympathetic to her.  This was one of those books where I knew how the overall story ended, but I was still completely enthralled by the story itself as well as the character's lives and feelings.

I did find Worth's portrayal of some characters to be really interesting.  Elizabeth's of York's mother, Elizabeth Woodville, is portrayed as this horrible, greedy, power mad woman while Richard III was portrayed in a much more sympathetic light.  I don't know how these people really were but I always find it interesting to see how authors portray controversial characters.  I also was fascinated with how the 'Princes in the Tower' were included in the story; it was a good addition to the story to show how Elizabeth had loyalties to both her brothers and her son and how she dealt with those conflicting loyalites.

Overall, I thoroughly enjoyed this book.  It was nice to read about a completely new and different character and her life.  Sandra Worth created a compelling story that made me want to keep reading.  4 stars.