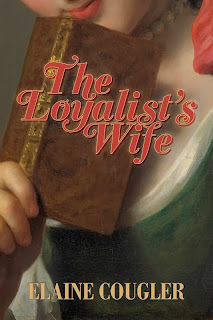 Synopsis:  When American colonists resort to war against Britain and her colonial attitudes, a young couple caught in the crossfire must find a way to survive. Pioneers in the wilds of New York State, John and Lucy face a bitter separation and the fear of losing everything, even their lives, when he joins Butler’s Rangers to fight for the King and leaves her to care for their isolated farm. As the war in the Americas ramps up, ruffians roam the colonies looking to snap up Loyalist land. Alone, pregnant, and fearing John is dead, Lucy must fight with every weapon she has.

With vivid scenes of desperation, heroism, and personal angst, Elaine Cougler takes us back to the beginnings of one great country and the planting of Loyalist seeds for another. The Loyalist’s Wife transcends the fighting between nations to show us the individual cost of such battles.

My Thoughts:  This book made me realize that I don't read nearly enough about American history.  Elaine Cougler took a really interesting period in history, added some wonderful characters and came up with a compelling story.  I don't think I've read anything that was told from the perspectives of those loyal to the British crown during the American Revolution.  I always feel like I should be sympathetic to the revolutionaries but Ms. Cougler made me feel sympathy for the other side as well.

Lucy is one of my new favorite characters.  She is one tough cookie!  Her husband, John, left to fight in the war and she stays on the farm and manages to keep it running, bring in the harvest, butcher a cow and even give birth completely on her own.  I enjoyed reading about such a tenacious character.  who never gave up no matter what was thrown her way.  I also really liked the character, John.  He seemed like a decent guy and it was hard to watch him struggle with fighting for his beliefs and wanting to be at home with his wife.  There were a lot of twists and turns in this book which made it hard to put down.  I really cared about the characters and I couldn't stop reading because I wanted to make sure that things were going to work out for them.

In addition to great characters, this book also had a beautiful setting.  A lot of the story takes place in New York State when it was still pretty uninhabited and Ms. Cougler did a wonderful job of describing the landscape.  Her descriptions of everyday life for both Lucy and John only made the story better.

I am really happy to know that this is the first in a trilogy.  I was kind of sad of when the story ended because I felt really attached to the characters and wondered where life would take them.  I would highly recommend this book to any fan of historical fiction.  4 stars.


I received this book from Historical Fiction Virtual Tours in exchange for an honest review.
About the Author: 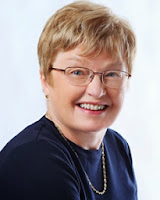 A native of Southern Ontario, Elaine taught high school and with her husband raised two children until she finally had time to pursue her writing career. She loves to research both family history and history in general for the stories of real people that emanate from the dusty pages. These days writing is Elaine’s pleasure and her obsession. Telling the stories of Loyalists caught in the American Revolutionary War is very natural as her personal roots are thoroughly enmeshed in that struggle, out of which arose both Canada and the United States.