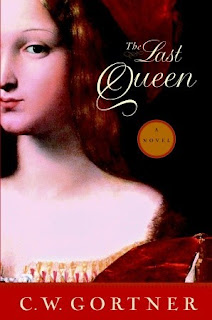 From Goodreads:  Juana of Castile, the last queen of Spanish blood to inherit her country’s throne, has been for centuries an enigmatic figure shrouded in lurid myth. Was she the bereft widow of legend who was driven mad by her loss, or has history misjudged a woman who was ahead of her time? In his stunning new novel, C. W. Gortner challenges the myths about Queen Juana, unraveling the mystery surrounding her to reveal a brave, determined woman we can only now begin to fully understand.

The third child of Queen Isabel and King Ferdinand of Spain, Juana is born amid her parents’ ruthless struggle to unify their kingdom, bearing witness to the fall of Granada and Columbus’s discoveries. At the age of sixteen, she is sent to wed Philip, the archduke of Flanders, as part of her parents’ strategy to strengthen Spain, just as her youngest sister, Catherine of Aragon, is sent to England to become the first wife of Henry VIII.

Juana finds unexpected love and passion with her handsome young husband, the sole heir to the Habsburg Empire. At first she is content with her children and her life in Flanders. But when tragedy strikes and she inherits the Spanish throne, Juana finds herself plunged into a battle for power against her husband that grows to involve the major monarchs of Europe. Besieged by foes on all sides, her intelligence and pride used as weapons against her, Juana vows to secure her crown and save Spain from ruin, even if it could cost her everything.

My Thoughts:  I have to say this is probably my most favorite of C.W. Gortner's books.  Juana of Castile is such an interesting historical figure and this book really brings her to life.  Gortner portrays Juana not as someone suffering from mental illness but as a woman with strong convictions who was manipulated and used by the men in her life.  She wasn't someone who would easily sit back and let people walk all over her and her husband tried to use that against her and claim she was crazy.  There was one scene where Juana attacked her husband's mistress who had stolen her clothes and jewelry and I know that back then, that was not acceptable but by today's standards, it wouldn't be unheard of.  We'll probably never know if Juana really was suffering from a mental illness or if she just didn't follow the status quo.  Either way, her story is very sad.

I think the story also tries to make a point about the status of women during that era.  The story looks at Juana and briefly at her sister, Catherine of Aragon, and shows how powerless women could be and how easily they could become pawns of the men in their lives.  It really makes think that it would have been very easy for Juana's father, husband and son made up the story about her being insane in order to capitalize on her position as heir to the throne of Castile.  Honestly, I thought her husband and father seemed like insecure jerks who couldn't deal with the fact that a woman had more power than they did.

Overall, this is an excellent book.  I highly recommend it for historical fiction lovers looking for a compelling story about a lesser known historical figure.