Review:: "The Pillars of the Earth" by Ken Follett 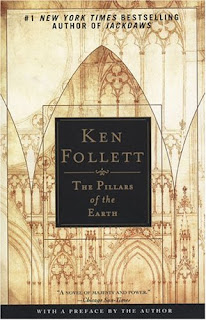 From Goodreads:   This book tells the tale of a twelfth-century monk driven to do the seemingly impossible: build the greatest Gothic cathedral the world has ever known.

Everything readers expect from Follett is here: intrigue, fast-paced action, and passionate romance. But what makes The Pillars of the Earth extraordinary is the time—the twelfth century; the place—feudal England; and the subject—the building of a glorious cathedral. Follett has re-created the crude, flamboyant England of the Middle Ages in every detail. The vast forests, the walled towns, the castles, and the monasteries become a familiar landscape. Against this richly imagined and intricately interwoven backdrop, filled with the ravages of war and the rhythms of daily life, the master storyteller draws the reader irresistibly into the intertwined lives of his characters—into their dreams, their labors, and their loves: Tom, the master builder; Aliena, the ravishingly beautiful noblewoman; Philip, the prior of Kingsbridge; Jack, the artist in stone; and Ellen, the woman of the forest who casts a terrifying curse. From humble stonemason to imperious monarch, each character is brought vividly to life.

The building of the cathedral, with the almost eerie artistry of the unschooled stonemasons, is the center of the drama. Around the site of the construction, Follett weaves a story of betrayal, revenge, and love, which begins with the public hanging of an innocent man and ends with the humiliation of a king.

My Thoughts:  I have been wanting to read this book for several years and I finally got to it!  The Pillars of the Earth is an incredibly intimidating book but once I started reading it, the story and characters sucked me in.  It actually read pretty quick for such a huge book!

The descriptions of the buidlings and the process of building the cathedral were extensive and very interesting.  At times it seemed a little long winded but for the most part I enjoyed reading about all of the work that went into building in 12th century.  The characters are all well-developed and Follett created one of the most awful villains I have ever read.  William Hamleigh will forever be on my list of super villains after reading this book.  He was such an evil character!   Most of the rest of the characters were likable and I definitely felt connected to Tom Builder and his family.  I liked that the story followed the family for so many years and I could watch his children grow up and flourish.

I don't know much about this period in history so I have no idea how historically accurate the story is.  That being said, it is still a wonderful work of historical fiction that I highly recommend. 4 stars.