Review: "The House at Riverton" by Kate Morton 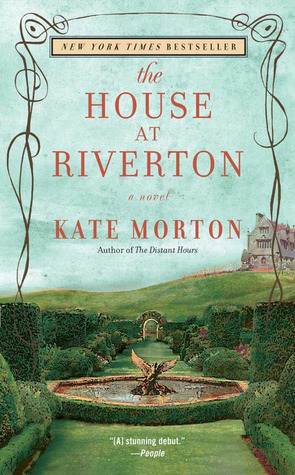 From Goodreads:  Summer 1924 On the eve of a glittering society party, by the lake of a grand English country house, a young poet takes his life. The only witnesses, sisters Hannah and Emmeline Hartford, will never speak to each other again.

Winter 1999 Grace Bradley, ninety-eight, one-time housemaid of Riverton Manor, is visited by a young director making a film about the poet's suicide. Ghosts awaken and old memories - long consigned to the dark reaches of Grace's mind - begin to sneak back through the cracks. A shocking secret threatens to emerge, something history has forgotten but Grace never could.

My Thoughts:  I love Kate Morton's books so I was really excited to pick this one up.  Unfortunately, I was somewhat disappointed in this one.  While the story had a lot of potential, it was slow moving and I found it hard to connect with the characters.  It looks like this is her first book and I must say that her writing and story-telling abilities have improved quite a lot since this book was published.

I liked the older version of Grace, she seemed like a feisty old woman and I have an affinity for old people though I wasn't a huge fan of young Grace.  I think Morton did a good job of making old Grace into a much more mature character who had done a lot of growing up in her life.  I didn't like how much guilt she felt regarding the past; there is a big secret alluded to throughout the story and when it is revealed I felt like it was a little silly that Grace felt so guilty for what happened.

The book kind of reminded me of Downton Abbey with their being the 'downstairs' and 'upstairs' characters.  I liked the downstairs characters a lot but the upstairs characters, not so much.  I thought Emmeline and Hannah were incredibly spoiled and self-centered and I had a hard time understanding Grace's devotion to them.  It seemed like she wasted a lot of her energy trying to build a relationship with Hannah when it was pretty obvious that it would only ever be a one-sided relationship.

The secret kind of got on my nerves throughout the story.  There is so much foreshadowing leading up to it and it wasn't revealed until the very end and at that point it didn't seem very shocking.  I also felt like it was kind of obvious what was going to happen by the end because it had been alluded to for so long.  I hate to be so negative about this book because I have enjoyed Morton's other books so much.  I definitely didn't hate the book but it didn't live up to my expectations.  3 stars.


This book is part of my personal collection.