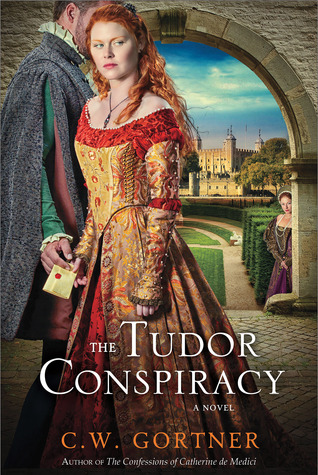 Synopsis:  Hunted by a shadowy foe in Bloody Mary’s court, Brendan Prescott plunges into London’s treacherous underworld to unravel a dark conspiracy that could make Elizabeth queen—or send her to her death in C.W. Gortner's The Tudor Conspiracy

England, 1553: Harsh winter encroaches upon the realm. Mary Tudor has become queen to popular acclaim and her enemies are imprisoned in the Tower. But when she’s betrothed to Philip, Catholic prince of Spain, putting her Protestant subjects in peril, rumors of a plot to depose her swirl around the one person whom many consider to be England’s heir and only hope—the queen’s half-sister, Princess Elizabeth.

Haunted by his past, Brendan Prescott lives far from the intrigues of court. But his time of refuge comes to an end when his foe and mentor, the spymaster Cecil, brings him disquieting news that sends him on a dangerous mission. Elizabeth is held captive at court, the target of the Spanish ambassador, who seeks her demise. Obliged to return to the palace where he almost lost his life, Brendan finds himself working as a double-agent for Queen Mary herself, who orders Brendan to secure proof that will be his cherished Elizabeth’s undoing.

Plunged into a deadly game of cat-and-mouse with a mysterious opponent who hides a terrifying secret, Brendan races against time to retrieve a cache of the princess’s private letters, even as he begins to realize that in this dark world of betrayal and deceit, where power is supreme and sister can turn against sister, nothing—and no one—is what it seems.

My Thoughts: I always enjoy C.W. Gortner's books and The Tudor Conspiracy was no exception.  It was a fun historical mystery that kept me intrigued from beginning to end.

Brendan Prescott is a neat character.  He grew up as a servant in the home of the Dudley's but he is smart and well-educated which always tends to surprise those who choose to underestimate him based on his origins.  He also has a pretty neat secret that I feel added something unique to this story and I'm curious to see how that might play out in future books.  I liked that he was not the usual ruthless spy; he was conflicted about his role as a spy.  He was devoted to protecting Princess Elizabeth but at the same time seemed to care about helping Queen Mary too.  I didn't envy his position because it seemed like no matter what, he was going to betray someone he felt close to.

I also think Gortner made Elizabeth and Mary into two really fascinating characters.  He didn't put them in the usual molds that you might see when reading a Tudor era novel and I really appreciated that.  He made them seem so human and he didn't try to make one the 'good' one and the other the 'bad' one.  I thought they were both sympathetic characters and I enjoyed reading about them.

The Tudor Conspiracy is a fast read that pulled me in and held my attention to the very end.  There are multiple mysteries and secrets throughout the story; as the it progresses, the reader slowly peels away the layers to each mystery and finds out who is doing what and with what aim in mind.  I loved that!  There wasn't just one big reveal, there were several.  I definitely wanted to keep reading to uncover what was really going on underneath all the mysteries.

The Tudor Conspiracy is the second book in the Spymaster Chronicles and I would highly recommend reading both this book and the first book, The Tudor Secret.  I am really hoping that there will be a third installment in this series because I really want to know what will happen to Brendan as he continues in his duties as a spy! 3 stars.

C.W. Gortner holds an MFA in Writing, with an emphasis in Renaissance Studies. Raised in Spain and half Spanish by birth, he currently lives in the San Francisco Bay Area.

He welcomes readers and is always available for reader group chats. Please visit him at www.cwgortner.com for more information.  You can also follow Christopher on Facebook and Twitter.