Review: "A Night to Remember" by Walter Lord 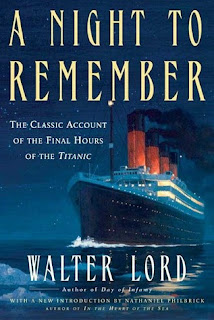 From Goodreads:  First published in 1955, A Night to Remember remains a completely riveting account of the Titanic's fatal collision and the behavior of the passengers and crew, both noble and ignominious. Some sacrificed their lives, while others fought like animals for their own survival. Wives beseeched husbands to join them in lifeboats; gentlemen went taut-lipped to their deaths in full evening dress; and hundreds of steerage passengers, trapped below decks, sought help in vain.

Available for the first time in trade paperback and with a new introduction for the 50th anniversary edition by Nathaniel Phil-brick, author of In the Heart of the Sea and Sea of Glory, Walter Lord's classic minute-by-minute re-creation is as vivid now as it was upon first publication fifty years ago. From the initial distress flares to the struggles of those left adrift for hours in freezing waters, this semicentennial edition brings that moonlit night in 1912 to life for a new generation of readers.

My Thoughts:   I remember learning about the Titanic in 2nd grade and thinking that it was an incredibly interesting event in history. When the movie came along it just reinforced my interest in the topic. Yes, I was one of those crazy teenagers who saw the movie multiple times in the theatre but I also watched an excessive amount of documentaries and read whatever I could get my hands on about the disaster. Somehow I missed A Night to Remember. It was really neat to read something that was written when there were still a lot of survivors still alive and were able to participate in the writing of the book. I am much more interested in the human aspect of the Titanic story than the more technical side so I really enjoyed how much information the book provided about individuals experiences on the ship.

I did find it intriguing that the author said that the people on the ship weren’t surprised that life boats were filled according to class. His argument was that because that was they society worked, people just accepted the first class got to go first, etc. Really? I find it hard to believe that when you know the ship is sinking and you may very well die, you would be like ‘oh yeah, it’s so logical that I should have to wait because I’m in 3rd class.’  I just am not so sure about that; I feel like whenever I am reading, or watching a documentary, about the Titanic, you can almost smell the fear.  I can't imagine people in that situation being calm and just waiting for their class' turn to get a boat.

A Night to Remember didn't provide any new insight into the Titanic tragedy but it was still compelling and heart-breaking.  It makes me so angry to think about how many deaths could have been prevented.  There are so many 'if onlys' and 'what ifs' when it comes to the Titanic and even though this is a fascinating historical event, I kind of wish the people involved had made better choices so that today no one would even remember there was a big ship called Titanic.

If you are interested in Titanic at all, I highly recommend this book.  4 stars.