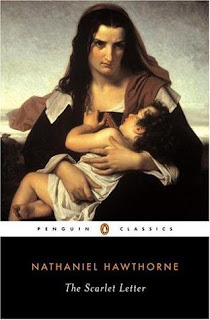 From Goodreads:  Set in the harsh Puritan community of seventeenth-century Boston, this tale of an adulterous entanglement that results in an illegitimate birth reveals Nathaniel Hawthorne's concerns with the tension between the public and the private selves. Publicly disgraced and ostracized, Hester Prynne draws on her inner strength and certainty of spirit to emerge as the first true heroine of American fiction. Arthur Dimmesdale, trapped by the rules of society, stands as a classic study of a self divided.

My Thoughts:  This is my first book finished for the Classics Bribe.  Yay!  I feel like I should have read this book a LONG time ago but I was kind of afraid of it.  After reading it, I am kind of surprised at myself because it was not bad at all.  It was a nice change to read a book that is mostly told from an outside perspective; it felt like I was watching through someone else's eyes.  There is a narrator but we never find out who this person is and and that never bothered me.

Hawthorne's writing is so good and his descriptions are fantastic: from the gold stiching on Hester Prynne's scarlet "A" to little Pearl and her personality, it was easy to imagine the characters and their world.  Hester was such a strong, passionate character and I really admired her ability to deal with being ostracized by the people in town.  She is a sharp contrast to Arthur Dimmesdale who I really didn't like.  I understand why he portrayed the way he was but he just seemed so sniveling and pathetic.  I wanted to shake him and yell "Man up!".  Based on his personality, it was really hard for me to imagine his involvement in Hester's story.  I was also kind of mad at the end because it felt like to me that he got off a little too easy (I don't want to give anything away so I won't elaborate).

Honestly, while I admired Hester immensely, my favorite character in the book was Pearl.  She was just so different!  She was bubbly and precocious and the way Hawthorne described her made her seem so adorable.  The way he describes her playing in the woods and her reactions to her mother and Dimmesdale was just awesome.

In the end, I was really glad I read this book.  It is definitely a unique piece of literature adn I really enjoyed it.  3 stars.

Quotes I loved:
"No man, for any considerable period, can wear one face to himself and another to the multitude, without finally getting bewildered as to which may be the true."

"The child could not be made amenable to rules. In giving her existence a great law had been broken; and the result was a being whose elements were perhaps beautiful and brilliant, but all in disorder, or with an order peculiar to themselves, amidst which the point of variety and arrangement was difficult or impossible to be discovered."