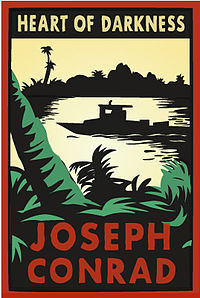 From Goodreads:  Dark allegory describes the narrator’s journey up the Congo River and his meeting with, and fascination by, Mr. Kurtz, a mysterious personage who dominates the unruly inhabitants of the region. Masterly blend of adventure, character development, psychological penetration. Considered by many Conrad’s finest, most enigmatic story.
My Thoughts:  I never had to read this in high school or college so I have always thought that I was missing something.  After reading it, I see now that it wasn't that big of a deal.  Let me just put it out there, this is a weird book.  I understand that it is exploring man's inner darkness as well as the atrocities committed by imperialists in Africa but the story is hard to follow.  It is definitely well-written in that it reads as though you are hearing a story someone is telling you.  But because of the way it is written, it is difficult at times to follow.  The narrator's obsession with Kurtz was strange and the fact that it continued despite Kurtz's death was even more strange.  I think I may need to re-read this book because I don't know if I got it.  I felt let down because I kept waiting to really hear what Kurtz had to say and why he was so great and then he died.  My first thought was, 'wait, what?'  It was very anticlimactic.   I am glad to be able to say that I have read this book but I did not really enjoy it at all.  2 stars.