Review: "Mary Boleyn: The Mistress of Kings" by Alison Weir 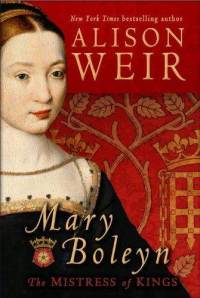 From Goodreads:  Mary Boleyn (c.1500-1543) was no less fascinating than her ill-fated queen consort sister Anne. In fact, her own claims to fame are numerous: She was not only an influential member of King Henry VIII's court circle; she was one of his mistresses and perhaps the mother of two of his children. In addition, the apparently prolific Mary was rumored to have been also a mistress of the King's rival, Francis I of France. Alison Weir's Mary Boleyn substantially redeems her subject's reputation by disputing her scandalous portrayal in Philippa Gregory's novel The Other Boleyn Girl. Our most detailed view yet of a power behind the throne.
My Thoughts:  I love Alison Weir and will read just about anything she writes.  She definitely didn't disappoint this time.  I was thoroughly impressed by the extent of her research for this book; it appeared that there just isn't a lot of clear cut documentation regarding Mary Boleyn's life and she had to wade through a bunch of material to be able to write this book.  Much of what Weir discusses is conjecture; she makes assumptions based on her knowledge of the time and where Mary's sister, Anne, was.  I got the impression that Mary Boleyn was the black sheep of the family but she definitely was the luckiest of her siblings in that she got to keep her head.  Weir did a great job of organizing her information in such a way that the book was really engaging; there are a lot of facts and explanations of her research that could have been very dry but she managed to keep the book moving at a good pace.  I also loved how she made it a point to emphasize how inaccurate The Other Boleyn Girl is and used her research to back this claim up.  If you are a fan of Alison Weir, or if you are just interested in Tudor era England, you will enjoy this book.  3 1/2 stars.