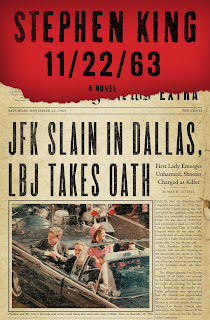 From Goodreads:  If you had the chance to change the course of history, would you? Would the consequences be what you hoped?

My Thoughts:  I can't believe I waited sooo long to read this!  I honestly think I was a little intimidated by how big it is which was completely silly because it was such a fast read.  There is so much about 11/22/63 that I absolutely love and am fascinated by like time travel, the JFK assassination and historical fiction.  It was the perfect book for me.

The premise of this book is awesome.  The idea of traveling back in time to stop the JFK assassination is so intriguing but what makes the book even more interesting is how the main character wasn't able to just travel back and stop it from happening.  Jake had to spend four years in the late 1950s/early 1960s assimilating to a completely different way of life; Stephen King does make Jake's assimilation to be a littl easier than I would have expected it to be but all in all, it still made for good reading.

I did think that I would be able to get away from some of Stephen King's usual creep factor in this book but not so much.  Jake ends up making a trip to Derry, Maine (home of that scary clown from 'It') and there are just some creepy characters like the Yellow Card Man and Johnny Clayton.  Jake definitely encounters different forms of evil on his quest but I think what is most creepy is how the past fights him.  Throughout the story, it is made clear that "the past" doesn't want to be changed and it has the power to try to stop whoever is trying to change things.

I have heard people say that Stephen King doesn't do well with endings but I must say that the ending to this book was perfect.  I don't want to give anything away but I liked that everything didn't end with puppies and rainbows (I don't want to give anything away because I really wasn't expecting what happened).  11/22/63 is now one of my favorite Stephen King books and I think everyone would enjoy it.  5 stars.