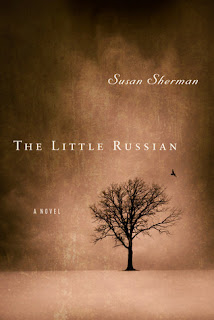 From Goodreads:  The Little Russian spotlights an exciting new voice in historical fiction, an assured debut that should appeal to readers of Away by Amy Bloom or Cold Mountain by Charles Frazier. Based on the experiences of the author’s grandmother, the novel tells the story of Berta Alshonsky, who revels in childhood memories of her time spent with a wealthy family in Moscow –a life filled with salons, balls and all the trappings of the upper class — very different from her current life as a grocer’s daughter in the Jewish townlet of Mosny. When a mysterious and cultured wheat merchant walks into the grocery, Berta’s life is forever altered. She falls in love, unaware that he is a member of the Bund, The Jewish Worker’s League, smuggling arms to the shtetls to defend them against the pogroms sweeping the Little Russian countryside.

Married and established in the wheat center of Cherkast, Berta has recaptured the life she once had in Moscow. So when a smuggling operation goes awry and her husband must flee the country, Berta makes the vain and foolish choice to stay behind with her children and her finery. As Russia plunges into war, Berta eventually loses everything and must find a new way to sustain the lives and safety of her children. Filled with heart-stopping action, richly drawn characters, and a world seeped in war and violence; The Little Russian is poised to capture readers as a highly regarded gem of the season.

My Thoughts:  I saw this book highlighted in People magazine and it piqued my interest.  I now think I am going to have to look to People magazine for more books because I really enjoyed in this book.  I have read a lot of really not so great books lately and it was refreshing to read something as good as The Little Russian.  It was a beautifully written story that takes place in Ukraine at the turn of the century.  The author writes of the contrasts between the extremely rich and extremely poor in such a way that you can almost see the shtetl and all of the people living in it.  She also escribes the horrors of the pogroms and the indignities heaped on the Jews in the Pale in great detail and her characters were incredibly well-rounded.  Berta is a great character; I thought she was a spoiled brat in the beginning but through her struggles and suffering she grows into this three-dimensional character who realized how bad her choices had been and fought as hard as possible to make things right.  I went from disliking her to admiring her and that was one of the things I liked best about the book.  Also, The story was engaging and sucked me in immediately.  I actually read this book in one day without meaning to; I just kept reading until it was done.  This was definitely an excellent piece of historical fiction and I loved that it tackled a subject that one usually doesn't see in the historical fiction genre.  4 stars.