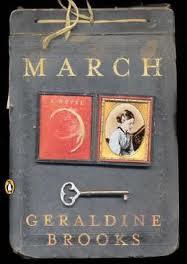 From Goodreads:  From Louisa May Alcott's beloved classic Little Women, Geraldine Brooks has animated the character of the absent father, March, and crafted a story filled with the ache of love and marriage and with the power of war upon the mind and heart of one unforgettable man (Sue Monk Kidd). With "pitch-perfect writing" (USA Today), Brooks follows March as he leaves behind his family to aid the Union cause in the Civil War. His experiences will utterly change his marriage and challenge his most ardently held beliefs. A lushly written, wholly original tale steeped in the details of another time, March secures Geraldine Brooks's place as a renowned author of historical fiction. My Thoughts:  I really wanted to like this book, I swear.  I thought it would be neat to see a different take on Little Women which is why I picked this up.  Ugh, it wasn't neat at all.  I know that March is a Pulitzer Prize winner but it just didn't do it for me.  The story is beautifully written but I really didn't like the character of Mr. March.  He was kind of a sad, annoying, pathetic man and I got really tired of being inside of his head.  The story is mostly told from Mr. March's point of view and that made the story even harder to deal with; I couldn't get away from him!  I know he meant well but he seemed to screw up everything he touched and had absolutely no business being involved in the war.  He seemed to be glory-seeking and extremely self-righteous in the beginning but wound up completely broken both mentally and physically in the end.  The characters in the story were great and I would have liked to get to know them more and have less of Mr. March.  This is a really short book but it took me way too long to get through and I really didn't want to keep going.  I feel kind of bad because I loved The People of the Book (also by Brooks) but this one was just not for me.  2 stars.