Review: "When Christ and His Slepts" by Sharon Kay Penman 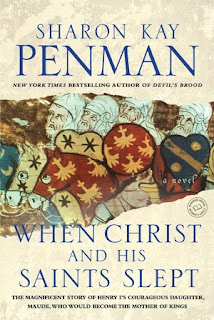 From Goodreads:  A.D. 1135. As church bells tolled for the death of England's King Henry I, his barons faced the unwelcome prospect of being ruled by a woman: Henry's beautiful daughter Maude, Countess of Anjou. But before Maude could claim her throne, her cousin Stephen seized it. In their long and bitter struggle, all of England bled and burned.

Sharon Kay Penman's magnificent fifth novel summons to life a spectacular medieval tragedy whose unfolding breaks the heart even as it prepares the way for splendors to come—the glorious age of Eleanor of Aquitaine and the Plantagenets that would soon illumine the world.

My Thoughts:  This book was so LONG.  I normally don't mind big books but this one felt really long.  It took me a week to finish and I was pretty happy when I was done with it.  Don't get me wrong, it wasn't a bad book at all.  It was incredibly well-researched and well-written and had a lot of potential.  The thing that bothered me is it felt like I was reading a work of non-fiction.  Penman covered every skirmish and seige over the 18 year battle between Stephen and Maude and it just felt like too much.  It was complete information overload.  After a while, I didn't care who won as long as the war was over.  I liked that she didn't try to make one side of the war more likeable than the other but really I didn't feel much sympathy for either Stephan or Maude and I actually really did not care about them.  I didn't really like most of the characters or feel sympathetic towards them and that is what made reading this book so difficult.  I really only liked Ranulf and Rhiannon.  I want to read a whole book about those two.  They felt real and three-dimensional and the rest of the characters were just so flat.  I feel  bad for not loving this book because Penman is supposed to be an amazing historical fiction author.  I still plan to read The Sunne in Splendour and I own another of her books so this didn't deter me from reading her books.  3 stars.