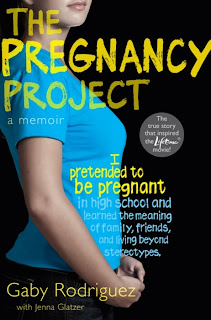 From Goodreads:  Growing up, Gaby Rodriguez was often told she would end up a teen mom. After all, her mother and her older sisters had gotten pregnant as teenagers; from an outsider’s perspective, it was practically a family tradition. Gaby had ambitions that didn’t include teen motherhood. But she wondered: how would she be treated if she “lived down” to others' expectations? Would everyone ignore the years she put into being a good student and see her as just another pregnant teen statistic with no future? These questions sparked Gaby’s school project: faking her own pregnancy as a high school senior to see how her family, friends, and community would react. What she learned changed her life forever, and made international headlines in the process.

In The Pregnancy Project, Gaby details how she was able to fake her own pregnancy—hiding the truth from even her siblings and boyfriend’s parents—and reveals all that she learned from the experience. But more than that, Gaby’s story is about fighting stereotypes, and how one girl found the strength to come out from the shadow of low expectations to forge a bright future for herself.

My Thoughts:  This was a unique tale of misplaced stereotypes and how a teenage girl tried to combat them by faking her own pregnancy.  The first half of the book is Gaby talking about her family and their background and I have to give her a lot of credit for being as strong and resilient as she is considering where she came from.  The rest of the book is how she created and implemented her senior project which was to fake a pregnancy and record peoples' reaction to it.  It was kind of sad to see how people treated her and what they said behind her back when they thought she was going to be a teen mom.  She must be a very mature to young woman to come up with, and stick to, such a difficult project and I really commend her courage.  It was so surprising a story that I would expect it to be a fictional tale.

This book is pretty hard for me to review because it is very straight-forward.  There isn't any fancy language or elaborate storytelling.  It is basically Gaby laying out the who/what/when/where/how of her senior project.  It's a pretty easy, quick read and was pretty interesting.  I hear there is a Lifetime movie of this book so I will probably check that out to see how the story is portrayed on screen.  3 stars.