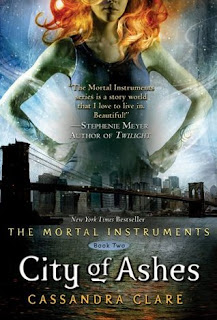 From Goodreads:  Clary Fray just wishes that her life would go back to normal. But what's normal when you're a demon-slaying Shadowhunter, your mother is in a magically induced coma, and you can suddenly see Downworlders like werewolves, vampires, and faeries? If Clary left the world of the Shadowhunters behind, it would mean more time with her best friend, Simon, who's becoming more than a friend. But the Shadowhunting world isn't ready to let her go — especially her handsome, infuriating, newfound brother, Jace. And Clary's only chance to help her mother is to track down rogue Shadowhunter Valentine, who is probably insane, certainly evil — and also her father.

To complicate matters, someone in New York City is murdering Downworlder children. Is Valentine behind the killings — and if he is, what is he trying to do? When the second of the Mortal Instruments, the Soul-Sword, is stolen, the terrifying Inquisitor arrives to investigate and zooms right in on Jace. How can Clary stop Valentine if Jace is willing to betray everything he believes in to help their father? My Thoughts:  I can't believe I waited over two months to read the second book in the Mortal Instruments series.  I definitely love the story and the characters but this book was definitely not as good as the first.  It took several chapters for me to get over being annoyed with Clary, Jace and Simon for being so whiny.  As much as I love these characters, they got on my nerves for about the first half of the book.  I did enjoy getting to know Luke a lot better in this book; he is a really neat character who wasn't showcased as much in the first book.  Clary's mom was kind of forgotten about though which I thought was strange because they were supposed to be trying to find a way to wake her up.  I am hoping that with the way this book ended, that will be the focus of the next book.  The second half of the book was definitely better than the first half.  The big battle scene at the end was really cool and there was a moment where I felt like some really important information was about to be announced and then wasn't.  So, we will see what kind of shocking revelations come out in City of Glass.  I am definitely looking forward to the next book.  3 stars.